Brisbane, Australia: Washington Sundar has recorded a rare Test match record as he scored a fifty after performing 3/89 in the 1st innings of the Brisbane Test. 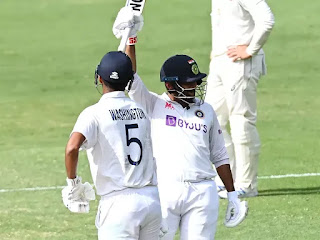 After Ashwin injury, Washington Sundar’s Test debut was a situational one but India have every reason to cherish what could be the start to a new career. In his maiden Test wicket, Washington Sundar gave all round performance as he dismissed Steve Smith in 1st innings of the ongoing 4th Test match in Brisbane.

Later, he went on to bag the wickets of Cameron Green and Nathan, performing 3/89 in the 1st innings. India’s chase to Australia’s 369 was falling weak with Rishabh Pant’s wicket bringing India down to 186/6.

But from there, a partnership was established between Washington and Shardul Thakur contributing 123 runs to their partnership. This is the highest 7th wicket stand for India at the Gabba. Both, went to score their maiden half-centuries in the 3rd session od Day 3.

Overall, Washington is only the 10th player who on his Test debut achieved the such a great record.

Before Washington, only one Indian all rounder  had achieved this in Test cricket and that was Dattu Phadkar with a 51 and 3/14 against Australia at the SCG in the 1947-48 tour.

Washington Sundar walked back to pavilion with a 62 on Test debut. Hence, Washington made it to the list of top run scores among Indian debutants batting at No.7. With his 62, Washington stands 3rd highest in the list after Rahul Dravid (95 vs England, Lord’s 1996) and Bapu Nadkarni (68* vs New Zealand, Delhi 1955).

One thought on “India vs Australia Test 4: Washington Sundar becomes only the 3rd Indian to score 50 on Test debut in Australia”