Sydney, Australia: Shubman Gill scores his maiden half-century but unable to go further as caught out by C. Green by P. Cummins at 50 and departures after facing 101 balls. 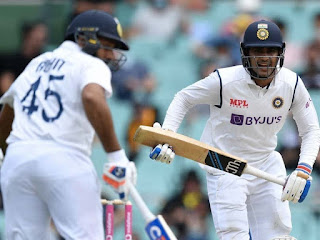 India will be looking and happy with their display against Australia on Day 2 of the ongoing third Test match at the Sydney Cricket Ground (SCG). Indians are able to get 96 for two in 45 overs at Stumps on Day 2. Australia gets all out for 338 on Day 2 of the third test.

Marnus Labuschagne able to get a half-century but need to go for the pavilion at 91 as R. Jadeja dismisses him. Except for Steve Smith and M. Labuschagne for Australia, no one have a great day so far. Australia ends his inning at 338.

For India, openers Rohit Sharma and Shubman Gill get a strong start and goes on to establish a 50 run partnership. But when both the opener’s go-to pavilion, India’s run-rate slows down, with Ajinkya Rahane and Cheteshwar Pujara trying to hold their wicket against the opposition bowlers.

Both are unbeaten on 5 and 9, respectively. India will be aiming to increase its momentum. Right now, India trail by 242 runs.