Bambolim (Goa): East Bengal finally got their first win in the Indian Super League 20-21 (ISL) season, in their first Hero ISL season, by beating Odisha FC 3-1 on Sunday at the GMC Stadium. 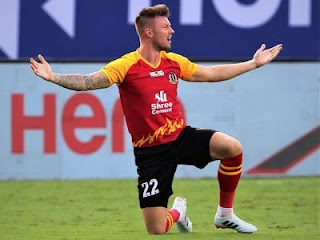 In start of the match, East Bengal FC came with two changes while Odisha named an unchanged eleven from their 2-2 draw against NorthEast United.

Both sides created chances in the first half but only East Bengal converted them and headed into the half-time with a two-goal cushion. The opening goal arrived early in the 12th minute, through a set-piece. Gaikwad took a throw-in and directed it to the far post. It bounced once and fell to Pilkington, who rose above Gaurav Bora, before heading his header into the goal.

Pilkington denied another goal after hitting the woodwork but Maghoma helped East Bengal double their advantage in the last few minutes of the first half. Matti Steinmann send the ball towards Maghoma on the left. Prancing into the box, he made space before shotting a powerful shot from a narrow angle, leaving Odisha keeper Arshdeep Singh with zero chance.