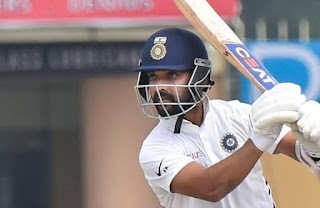 December 28: Yesterday, A. Rahane become the only second batsman who was able to score two centuries at the great iconic stadium, MCG on Sunday on the second day of the Boxing Day Test between Australia and India.

Earlier, there was only one Indian Batsman who was able to do it. Vinoo Mankad, was the first batsman, Indian batsman to score two Test centuries at MCG. Not even Virat Kohli or Sachin Tendulkar holds this record.

Till now at MCG, Vinoo Mankad scored two test centuries MCG, followed by A. Rahane who made this record yesterday leading the Indian team as captain in absence of Virat Kohli.

Sunil Gavaskar, Sachin Tendulkar, Virendra Sehwag, Virat Kohli, Cheteshwar Pujara and Gundappa Viswanath are the only other six players who scored only one test century at MCG.

In 2014, Ajinkya Rahane was able to get his name in the century scored by Indian at one of iconic Lord’s ground in the Test match. Now, yesterday, he added one more record in his career and becoming one of the toughest test players of the Indian Cricket team.