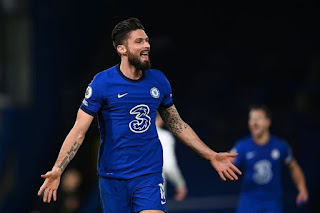 December 29: After a surprising defeat from Arsenal, Chelsea gets an equalizer today against Aston Villa. After today’s match, Chelsea ends the sixth position while Aston Villa one position ahead of Chelsea.

Chelsea comes with dropping Hakim Ziyech, while Callum Hudson-Odoi, Jorginho, N’Golo Kante, and Edouard Mendy are the changes in today’s evening. Match whistle blows off, and Mason Mount gets underway. Aston Villa gets his first shot on target at 7 minutes of the match but saved by Mendy.

At 12 minutes, Pulisic intercepts a bad pass by Grealish but misses the goal. Just after, two minutes, he gets another chance when McGin blocks for the corner and Marttinez saves the corner.

Pulisic once again comes in action when Grealish send a ball across the face of the goal at the 17th minutes but Pulisic cons back to cover, conceding a corner.

Villa’s Traore shots but blocked by Rodiger. Around 21 minutes comes a head injury to Matty Cash when Pulisic accidentally kicked his head when trying to kick overhead pass.

Cash comes back after getting a check for his concussion and games resume to normal. Villa continues to make pressure and chances over Chelsea but keeping on missing target.

At 30 minutes, it is a perfect chance created by right back, but unable to do so. But, after 4 minutes, a team who is looking will break the deadlock, fails as Chelsea gets his first goal of the match.

Ground scores for Chelsea with a diving header to the cross given by Chilwell. From here, Chelsea takes full control of the match and playing comfortably.

After halftime, the score is 1-0, Chelsea leads, and the match continues. It just4 minutes passed after halftime that here comes an equalizer. El Ghazi gets an equalizer very early in the second half. Now, the villa holds and puts pressure over Chelsea after the goal.

At 66 minutes, Azpilicueta Goals! But it is offside. Both the teams keep on attacking each their defense and trying to goal but keep on missing the target and this goes on till full time.

Even in 4 minutes added time, Chilwell hits from left-back, whisker wide with Martinez beaten. But, in the end, both the teams ended in a draw. Lampard’s team finish 2020 with a draw.