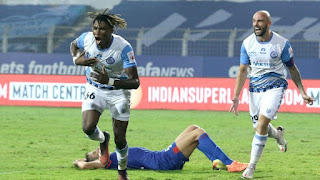 Fatorda, Goa: Jamshedpur FC beats Bengaluru FC 1-0 at the Fatorda on Monday. Jamshedpur FC jumps to third with this win in the table. JFC is now with 13 points in nine matches whereas BFC stays fourth with 12 points from eight games.

At the start of the match, BFC comes up with two changes from their last match, bringing in Suresh Singh Wangjam and Kristian Opseth in place of Udanta Singh and Deshorn Brown whereas Jamshedpur comes up with one change by Mobashir Rahman replaces Isaac Vanmalsawma.

Sunil Chhetri shoot towards goal by a brilliant Suresh pass, but the skipper’s shot from a good position was stopped, getting a corner and Dimas take right corner and get Chhetri, but his effort sails over the bar.

JFC gets their first big chance in the 17th minute when Aniket Jadhav drills in a low cross for an unmarked Nerijus Valskis, only for the Lithuanian to smash it well over the bar. Jamshedpur gets another chance when Alexandre Lima keeps an Aitor Monroy corner alive and squares the ball to Eze. However, Dimas Delgado clear Eze’s shot on goal.

After halftime, the score is at 0-0. After, the halftime match starts with an equal side with zero goals.

Both teams keep knocking on the door of each other with Chhetri missing attempts for BFC while Gurpreet Singh denies Jackichand Singh with a smart save.

In the second half, Jamshedpur rejects BFC with two vital blocks. First, Peter Hartley shots getting saved by Gurpreet, and then rebound fell into Eze’s path and Bheke blocks his goal-bound shot.

Finally, JFC broke the deadlock with Eze, who scores his third goal this season with a header in the 79th minute of the match. Lima plays a pass towards Aniket on the right and he gives a cross in the box. Eze gets a chance to pass his marker and dives low to score.

After this, only one more shot comes with just five minutes left on the clock by Bheke but Rehenesh denies Bheke.

This is the final result which we get in this match. Tomorrow’s ISL 20-21 match is between ATK Mohun Bagan vs Chennaiyin FC. That is on December 29, 2020.