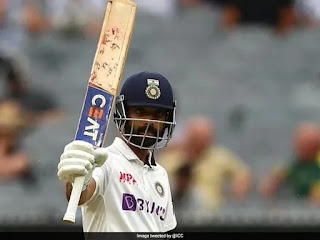 IND vs AUS Cricket Score, 2nd Test, Day 2 Updates: Rahane leads India on Day 2 with 82 runs lead over Australia as he smashes a century off 195 balls. India ended at 277/5 at the time of stumps.

Day 2 started with Shubman Gill and C. Pujara at India’s score of 36/1. This ended up scoring 277 at 5 wickets lose.  Debutant Shubman Gill fell for Pat Cummins at 45, missing the chance to score a half-century. Giving Australia the primary breakthrough on Day 2 at the MCG. C. Pujara at 17 gave a wicket to Pat Cummins allowing H. Vihari to enter the crease.

A.Rahane anchored the innings at one end but the wicket keeps on falling on another end. First, H. Vihari goes 21 at 66 and R. Pant comes to bat and got a chance at the place of W. Shah. He was able to score only 29 playing just 40 balls.

Innings started to pace as when R. Jadeja comes to bat, he holds the innings till the stump and helped Rahane to play his natural game, which resulted in a century of A. Rahane.

At the end of the day, Australians were unable to get R. Jadeja and A. Rahane out as they batted with patience and provided India a lead of 82 runs at the stumps.