WATCH: Ashwin catch Steve Smith again, gets him for a duck

WATCH: Ashwin catch Steve Smith again, gets him for a duck 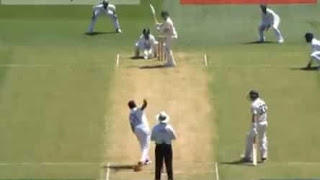 Australia won the toss and elected to bat first on Day 1 of the Boxing Day Test match at the Melbourne Cricket Ground, but once again Ravichandran Ashwin emerged as India’s most successful bowler. Ashwin got two important wickets including the one of Steve Smith to give India the early advantage of the second Test, till now.

It was clear plan by  Ashwin as he dismissed Smith with a slider in the first innings of Adelaide and once again, he removed Smith for a duck – his first against India in Tests – on Saturday.

India set a leg-side trap, with a backward and forward short-leg and Smith got caught right into it. He got an inside edge and Cheteshwar Pujara standing at leg slip dived towards his left to take a sharp catch.

Sunil Gavaskar said,“First and foremost, I’m pretty surprised at the fact that on Day 1 there’s a lot of turn for the Indian spinners. He’s been bowling straight, he’s been bowling on the middle and leg, it’s been pretty much a plan to try and restrict the batsmen from playing any shot through the off side. If you look at Smith’s dismissal because maybe he was on zero he wanted to get off the mark, wasn’t able to control it. On the other hand, there were a couple of delivery when Labuschagne was playing and he shouldered arms, Smith could’ve done that as well but I’m not complaining.”

In Test cricket, this was only the fifth duck for Steve Smith . He has now been dismissed by Ashwin five times in test cricket.

Ashwin  was brought into the attack in the 11th over by stand-in captain Ajinkya Rahane, when Ashwin remove Matthew Wade for 30.

Earlier, Indian deadly pacer, Jasprit Bumrah gave India a flying start, having opener Joe Burns caught behind for an uneasy 10-ball duck in his second over.