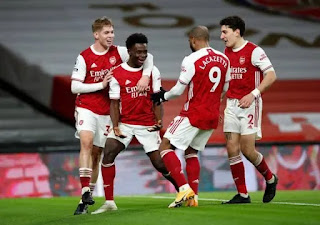 Today, Arsenal faced Chelsea in a London derby match on Boxing Day as Arsenal ended up with 3 goals and rest on the winning side.

Mikel Arteta’s side in the Premier League this season was in 15th place before going into the game and ended up one position high in the table at 14th position.

The Arsenal has put itself in such a place that before the match Mikel Arteta admitted that the upcoming matches against Chelsea, Brighton, and West Brom will be crucial in determining their fortunes for the rest of the season.

Arteta’s original words, “The next seven to eight days are going to be crucial to see where we’re going to be heading to in the Premier League”

“I think the medicine for all of us would be to come here against Chelsea, beat them, and then move from there. It’s exactly what we all need.”

Tammy Abraham ended up scoring late for Chelsea. They ended up in the sixth position after the defeat.

Earlier, Arsenal announced that due to COVID-19, Gabriel will miss their next three games because he is self-isolating.

Also, Arsenal was on its backstep because defender David Luiz and winger’s free-kick clipped the post.

The hosts got a penalty just after the half-hour mark when Reece James brought down Kieran Tierney and Lacazette converted the spot-kick.

Xhaka doubled their lead just before halftime with a fantastic free-kick.

Few minutes before the final whistle, Mohamed Elneny struck the bar before Abraham grabbed a consolation goal late on for the visitors.

In stoppage time, Chelsea got a penalty but Bernd Leno saved from Jorginho as Arsenal escaped a nervous finish.