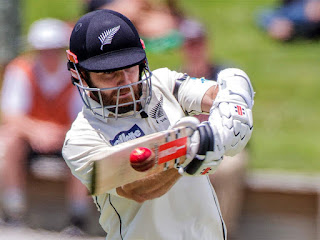 Kane Williamson went to play a classic inning of 94 not out till the end of day 1, keep Pakistan struggling to get him out.

Pakistan won the toss and opted to bowl and Shaheen Afridi provided a great start on the green pitch in New Zealand. Afridi got New Zealand Opener, Tom Latham gets lots of edge through the slip with the first ball of the Test match, and struggling Latham would last only a couple of more deliveries and ended his innings by getting an edge and delivering straight to third slip. Blundell does the same, but this time the left arm’s angle took the ball away from the right-hander.

Then here comes  Williamson and Ross Taylor and do what they are known for. New Zealand digs a hole, fill it up so well by end of the day, and kept Pakistan bowler to struggle to get any other wicket. The two batsmen made 120 runs for the third wicket, putting away their shots in cold storage for a fair part of the afternoon and trolling the inexperienced Pakistan attack. Ross Taylor scored his second-lowest fifty in 127 balls.

Innings started to slow but when Yasir Shah was reintroduced into the attack in the afternoon. Taylor and Williamson took the pace and taking the wind off the sails further for Pakistan. Afridi, Mohammad Abbas, and Naseem Shah kept beating the bat but New Zealand continued to look solid in the middle.

After Teatime, Taylor fiddled with delivery outside off-stump and was dismissed caught-behind. Pakistan had got one more wicket but Abbas dropped a simple chance at the deep fine leg of Nicholls.

It was an up and down journey for Pakistan, and Williamson was able another 89 runs for the fourth wicket with Nicholls at the other end.