Hrithik Roshan who recently watched her film, Wonder Woman 1984 in a theatre with his family, praised the actress on Twitter. He twitters,” Just watched Wonder Woman. Exhilarating experience. My childhood crush (Wonder Woman) and my first love (Wonder Woman ) together with the big cinema IMAX experience! Doesn’t get any better than this. Thank you Gal Gadot for being the perfect Wonder Woman. And congratulations to the entire team.”

Now Gal Gadot thanks Hrithik by twitting”So glad you enjoyed the movie, Hrithik Roshan! Wishing you and yours a happy holiday.” 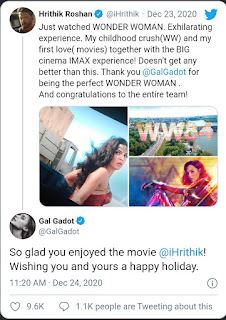