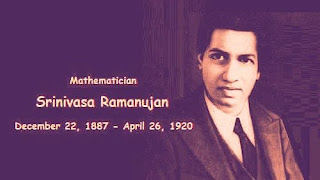 December, 22: On 22 December 2012, the ex-Prime Minister of India, Dr. Manmohan Singh, paid tribute to Srinivasa Ramanujan on the occasion of his 125th birth anniversary in Chennai and declared December 22 as National Mathematics Day.

Who was S Ramanujan?

Ramanujan was one among the best Mathematician of all times. He was born on 22 December 1887 into a Tamil family in Erode, Madras Presidency (now Tamil Nadu , India).

Ramanujan had an interest in mathematics since childhood. His interest in mathematics can be seen through his work in his book. The book was ‘A Synopsis of Elementary‘ leads to Pure and Applied Mathematics’ by George Shoobridge Carr. The book was filled with theorems, many with proof and lots of without. He had found the book in 1903 when he was just 15 years aged . The book encouraged Ramanujan to leap in and make connections on his own. However, since the proofs included were often just one-liners, Ramanujan had a misunderstanding of the rigour required in mathematics.

Despite being a prodigy in mathematics, Ramanujan didn’t have an excellent start to his career. He obtained a scholarship to school in 1904, but he quickly lost it by failing in nonmathematical subjects. He tried during a college in madras but there also he failed his first Arts exam. He drifted through poverty until 1910 when he got an interview with R. Ramachandra Rao, the secretary of the Indian Mathematical Society. Rao was initially have no confidence about Ramanujan but eventually recognized his ability and supported him financially.

Ramanujan become famous among Indian mathematicians, but his colleagues felt that he needed to visit the West to return into contact with the forefront of mathematical research. Ramanujan started writing letters of introduction to professors at the University of Cambridge. His first two letters went unanswered and still he didn’t give up and at last his third letter—of January 16, 1913, to G.H. Hardy—hit its target.

Ramanujan has suffered from health problems throughout his life. His health worsened in England. He was diagnosed with tuberculosis and a severe vitamin deficiency and confined to a sanatorium. In 1919 he returned to Kumbakonam, Madras Presidency, and in 1920 he died at the age of 32.

Funny and interesting quotes on mathematics

1.That awkward moment once you finish a math problem and your answer isn’t even one among the choices— Ritu Ghatourey, Indian writer

2.Mathematics is that the world’s best game. it’s more absorbing than chess, more of a big gamble than poker, and lasts longer than Monopoly. It’s free. It are often played anywhere — Archimedes did it during a bathtub — Richard J Trudeau, mathematician

4. “Mathematics is not about numbers, equations, computations, or algorithms: it is about understanding.” -William Paul Thurston

5. “Since the mathematicians have invaded the theory of relativity, I do not understand it myself anymore.” -Albert Einstein