December, 20: Yesterday, Australia beats India in the first Day-Night Test. India in the second innings makes a record of scoring the least runs in an innings of a Test Match. On day three of the test, India was on 9/1, later end up at 36 all out. Giving Australian a small target to achieve which, Australian Team end up chasing on Day 3 itself.

It was a spirited performance from Australia’s fast-bowling duo of Josh Hazlewood and Pat Cummins, made fun of and mockery of India’s widely-acclaimed batting line-up. India, who were ahead by 62 runs after the second day’s play, could only add 27 runs to their overnight score.

Like everyone, Australian opener, David Warner praised his team performance on Instagram. While praising, he commented that: 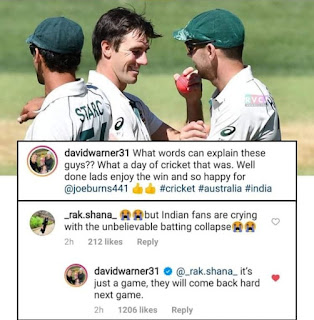 “What words can explain these guys? What a day of Cricket that was. Well done lads enjoy the game and so happy for you @joebuns441👍 #cricket #australia #india”

David Warner also has a great fan following in India too, that’s why a user on Instagram commented and replied to David Warner that:

“😭😭but Indians fans are crying with the unbelievable batting collapse.”

“it’s just a game, they will come back hard next game.”